Are you addicted to social-media accounts that make your blood boil? You’re not the only one.

BRIDAL blogs. Pointless vlogs. People who are high-level sanctimonious, saving the world from their nice two-bed flat in Hackney.” These are the people that one media professional lists as his “hate follows”.

A hate follow is someone you follow on social media who irks you. They might be insufferably smug, or droningly “woe is me”, or perhaps they have a set of outrageous opinions you can’t help but get hooked on. You may not even realise you hate-follow; it could be subconscious. That old schoolfriend who posts a #blessed picture of her boyfriend doing the downward dog in front of a Goan sunrise — which you take a screenshot of and send to your three best friends — who you can’t bring yourself to unfollow because you sort of liked her in 1997? That’s a hate follow, pal. It’s that media personality you follow on Twitter for their inflammatory views (Katie Hopkins); the reality-TV starlets whose abundance of yachts and jets (Brendan Fitzpatrick from Rich Kids of Beverly Hills), and plugs for diet teas, teeth- whitening kits or “artistic collaborations” (anyone from Towie or Made in Chelsea) provide you with daily titillation.

The components of a good hate follow include narcissism, vapidity, arrogance, money and a surplus of leisure time. Triggers include first-class tickets, life-affirming mantras and faux-natural selfies. They are also people who have what you perceive to be a better life than yours. “They’re people who wind me up,” says a sleep-poor, Instagram-dependent young mum. “It’s masochistic, but I find taunting myself with their envy-making lives cathartic.” She namechecks “mommy-grammers” such as Courtney Adamo and Lena Perminova, whose glossy lives make her feel inadequate. Or it’s health bloggers, who make the desk-hunched weep over their canteen breakfasts. How many, one wonders, of Kim Kardashian West’s 86m Twitter and Instagram followers are hate follows?

The overwhelming response from friends and acquaintances after I posed the question, “Do you hate-follow?” on social media and e-mail, is proof positive of how many people actually do it. One colleague even admits: “Hate follows comprise 25% of everyone I follow on social media.” But why do we love to hate? 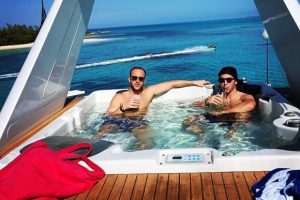 It’s all about self-affirmation, says the psychologist Dr Michael Sinclair, clinical director at City Psychology Group. “In a world where everything is moving so fast and we feel increasingly insecure, we find ourselves angrier and more anxious. Hate-following is primal; it leaves us full of adrenaline and in a defensive, protective state.”

Where there is success, there is snark. Putting people down can, albeit transiently, boost your self-worth. As the media professional puts it: “I watch videos of people I hate to reassure myself that I am better, more thoughtful and ironically detached from the altar of social media.”

As a social-media enthusiast, I live in fear of hate follows, yet some see it as a perk. “Thousands of people hate-follow me,” says the journalist Milo Yiannopoulos of his controversial Twitter timeline. “I find it hugely satisfying. People find me too funny and fascinating to deny themselves the pleasure. Even my enemies can’t help themselves.”

Hate-following is the social-media incarnation of whispering behind someone’s back (everyone who sent me anecdotes requested anonymity). It is mostly passive and silent, but sometimes it can be clamorous, such as the comments under the stylist Chloe Bartoli’s pictures after she was seen enjoying a PDA with Scott Disick, Kourtney Kardashian’s ex. However, according to the aforementioned young mum, you have to have limits: “I’d never comment or tag.”

Judging someone through the lens of their own social-media curation could be bad for you, too. Sinclair warns that the constant comparison with other peoples’ lives can intensify feelings of low self-worth and segue into depression. As one colleague says: “I feel a bit crap afterwards. I know it isn’t good for me.”

“Rather than hate-following, I would suggest you cleanse and purge yourself of  such accounts, before restoring your faith  in the world with a video of a chihuahua,”   ne friend advises. The male media professional concludes: “Who is lamer, the person detailing their eating habits on YouTube or the person watching those videos for kicks?”

Perhaps the answer is a karmic one: feel free to hate-follow if you yourself don’t mind being hate-followed. Sound fair?